The RBNZ took a decidedly hawkish tilt this week as the central bank raises its official cash rates. The terminal rate has now been increased to 4.1% in December 2023 and that is up from 3.95% projected at the prior meeting. The December 2022 projection is also up to 3.69% from the prior reading of 3.41%. So, with the RBNZ hiking by 50bps this week to 3% the RBNZ is pressing on to tackle high inflation.

With the global macroeconomic environment slowing down Governor Orr recognised that there could be below potential growth in New Zealand due to subdued consumer spending. The RBNZ recognised that house prices have dropped from recent high levels and he expected that to continue over the coming year.

At the last print in July headline inflation for New Zealand was at 7.3%. The RBNZ recognised that domestic inflationary pressures had increased since May to further bring forward the timing of OCR increases. The RBNZ reaffirmed its commitment to bring consumer inflation back down to the 1-3% range. Monetary conditions need to continue to tighten and the RBNZ agreed that maintaining the current pace of tightening remains the best means.

This was a hawkish meeting. The RBNZ increased its rate projections for the future expecting them to peak at 4.1%. It kept Its commitment to hiking rates in order to contain consumer inflation and this should keep the NZD being bought on dips. The best opportunity would come from any signs that the RBA is turning more dovish. In this instance, a potential AUDNZD short trade can open up. However, it would need a fresh catalyst to justify entering a medium-term AUDNZD short.

Retail sales have become a bellwether of the economy, and consequently for the movement of currencies. Additionally, they can swing market sentiment, particularly if it’s a major economy that’s reporting. Tomorrow there are two currency majors reporting the latest figures, and that could shake up their respective pairs a bit.

Retail sales figures are particularly important now that fuel prices are coming down. The underlying components show how the consumer side of the economy is being impacted by inflation. Central banks – particularly relevant to the data tomorrow, the BOE and BOC – are going all-in on fighting inflation. Demand is one of the driving forces of inflation.

One of the things that can lead to confusion in the current environment is that some countries adjust for inflation in their surveys and others do not. The UK, for example, publishes inflation-adjusted retail sales data, while Canada (like their neighbor to the south) does not. Given how high inflation is among the reporting countries, this can lead to some very uneven numbers, which needs to be taken into context.

The main issue for now is volume. Are consumers buying more, or simply spending more? If consumers are spending more, even if volumes aren’t going up, it could mean the situation isn’t so dire. And if inflation gets under control, then volumes can potentially increase and the economy right-side. But, if retail sales are going down, and volume is going down, it could mean that consumers are simply running out of money, and that can imply a recession is imminent. Like the BOE already warned.

What’s in the data? UK July retail sales are expected to show a monthly decline of -0.2% compared to -0.1% in the prior month. On an annual basis, however, the decline is expected to narrow th -3.3% compared to -5.8% prior. But this is likely explained by slowing sales last year as the delta variant took hold in the summer. The acceleration to the downside in the monthly figure might worry investors more.

How does Canada compare?

Canada’s expected figures are dramatically different, because they aren’t adjusted for inflation which last came in at an annual rate of 7.6%, and a monthly rate of 0.1%. Canadian monthly retail sales are expected to have increased by 0.3% compared to 2.2% in the prior month (reflecting the improving inflation situation). Annual retail sales are expected to have grown 9% compared to 14.1% in the prior report. Again, the annual comparables likely due more to covid effects last year, than the current situation. 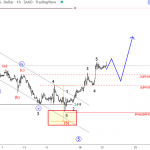 Will the ECB drive gold prices higher or lower? [Video]

Only US policymakers can stop the dollar’s growth

EURUSD: Is the euro back?